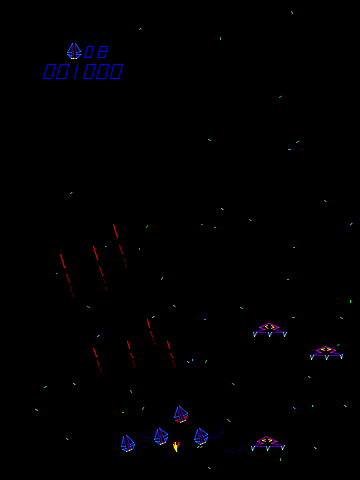 Tac/Scan is a 1982 space combat shooter video game originally released as an arcade game, and later ported to the Atari 2600. It was developed by Sega Japan and published by Sega America. The game was notable for its 3D vector graphics that switched between an overhead and third-person perspective, and for its tactical elements, putting the player in command of seven units in squadron formation through waves of attacking enemies; the player can gain reserve units, while being able to command the units to perform various actions, including firing at enemies, getting into formation, or a "tac" maneuver. Gameplay Tac/Scan is a unique game in that the player controls just how many resources (in this case, ships) are put into play. He starts with seven individual ships in play. Those ships can be lost in any of the three stages by hitting a tunnel, getting shot, or colliding with an enemy, the laser-firing Ahmins composing the superfleet from the planet of Ahm. The player is able to "collect" and earn these ships back as the game progresses. He can drop down to one ship in the game, but still have four "back-up" ships. If he loses the one ship in play however, the game is over. This is different from other games that give the player ships sequentially. In the first stage, the player pilots his ships through waves of attacking enemies. He can either fire upon them, or "tac" his ships around them. The second stage is much like the first, except that it is from a 3-D third-person perspective from behind the player's ships. In the third stage, the player pilots his ship down a space warp tunnel, and will lose any ships that touch the side of the tunnel.

Enemy airships are approaching your command base! You need to fly your five plane squadron into battle to defend it. You control a squadron of five ships at the bottom of the screen, your goal is to earn as many points as possible by destroying the various enemies which will be attacking. If one of the ships in your squadron is hit by enemy fire, it will be destroyed. The game ends when all five ships have been destroyed. As you progress through the game, you will occasionally have the chance to replenish missing ships. Everytime you complete a round by shooting ten enemies, an extra ship will float by on the screen. You can add this ship to your squadron by catching it in an empty space in the formation. Every time you complete four rounds, the game will advance to the next level with increased difficulty!

The gameplay is fun, ships are automatically replenished from time to time and for 1982, the graphics are pretty incredible!